December and summer are finally here, along with a renewed sense of optimism that strict lockdown measures will ease by Christmas. It’s been a tough year, but once again Australians have proved extremely resilient. We wish all our clients and their families a relaxed and happy Christmas.

November was an extraordinarily action-packed month for the global and local economy. Joe Biden’s US election victory released a pressure valve on global markets, with US shares reaching new historic highs and Australian shares up more than 9% over the month.

Markets also responded positively to the potential early release of effective coronavirus vaccines despite a rise in global cases. Oil prices were quick to respond to the prospect of borders reopening, with Brent Crude up almost 22% over the month.

In Australia, the Reserve Bank (RBA) cut its target cash rate and 3-year government bond yields from 0.25% to 0.1%, or one tenth of one percent. The RBA is not expecting to increase rates for at least three years. Early indications are that swift action by the government and the RBA have limited the impact of the COVID recession. Economic growth is now forecast to contract 4% in 2020, before rebounding 6% in the year to June 2021. Unemployment, which rose slightly to 7% in October, is forecast to peak at 8% this year but to remain at a relatively high 6% in December 2022. This is reflected in the fall in annual wages growth from 1.8% to 1.4% in the year to September. The Aussie dollar rose 5% on US dollar weakness in November, to close at US74c. The US currency is falling as a spike in coronavirus infections and delays in government stimulus raise the prospect of more money printing. 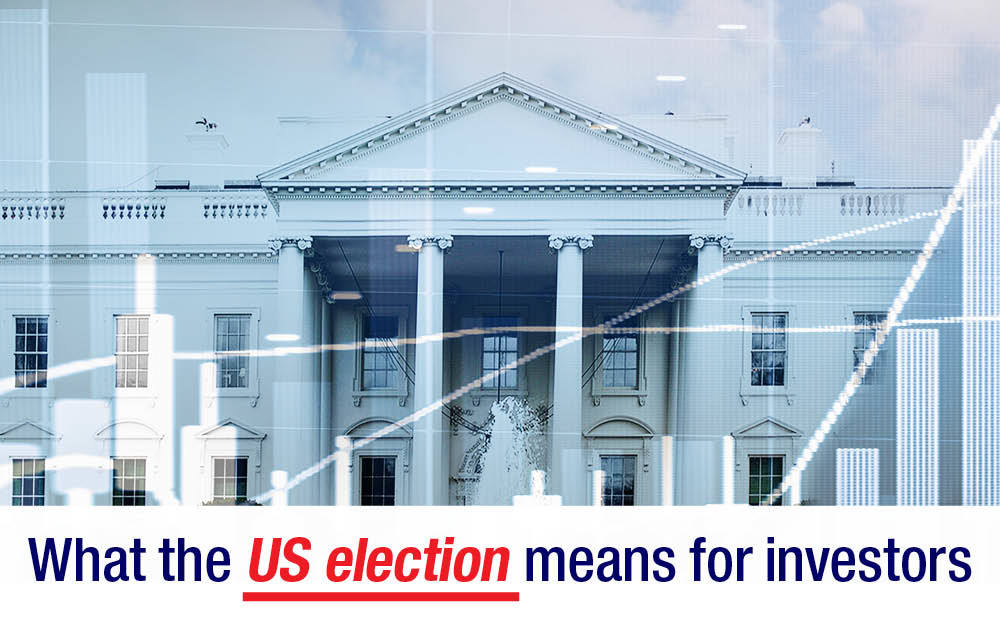 Democrat Joe Biden is pressing ahead with preparations to take the reins as the next President of the United States. Despite legal challenges and recounts, the early signs are that markets are responding positively.

In fact, the US sharemarket hit record highs in the weeks following the November 3 election as Biden’s lead widened.

So what can we expect from a Biden Presidency?

The policies Joe Biden took to the election which stand to have the biggest impact on the US economy and global investment markets include the following:

While a Republican Senate may oppose measures such as higher corporate taxes and tougher regulation of industry, it is expected to be more open to other policy initiatives.

The outlook for markets

The general view is that further stimulus spending should support the ongoing US economic recovery which will in turn be positive for financial markets.

While Biden is committed to heeding expert advice in his handling of the coronavirus, a return to lockdown in major cities may put a short-term brake on growth.

Longer-term, recent announcements by pharmaceutical company Pfizer and others have raised hopes that vaccines to prevent COVID-19 may not be far off. This would provide an economic shot in the arm and continued support for global markets.

However, as sharemarkets tend to be forward looking, the US market appears to have already given Biden an early thumbs up with the S&P500 Index hitting record highs in mid-November.

While the past is no guide to the future, it does suggest the market is not averse to a Democratic president.

What’s more, shares have done best during periods when there was a Democrat president and Republican control of the House, the Senate or both with an average annual return of 16.4 per cent.i

Any reduction in trade tensions with China would be positive for our exporters and Australian shares. While a faster US transition to cleaner energy might put pressure on the Morrison government and local companies that do business in the US to do the same, it could also create investment opportunities for Australia’s renewables sector.

Ultimately, what’s good for the US economy is good for Australia and global markets.

If you would like to discuss your overall investment strategy as we head towards a new year and new opportunities, don’t hesitate to contact us. 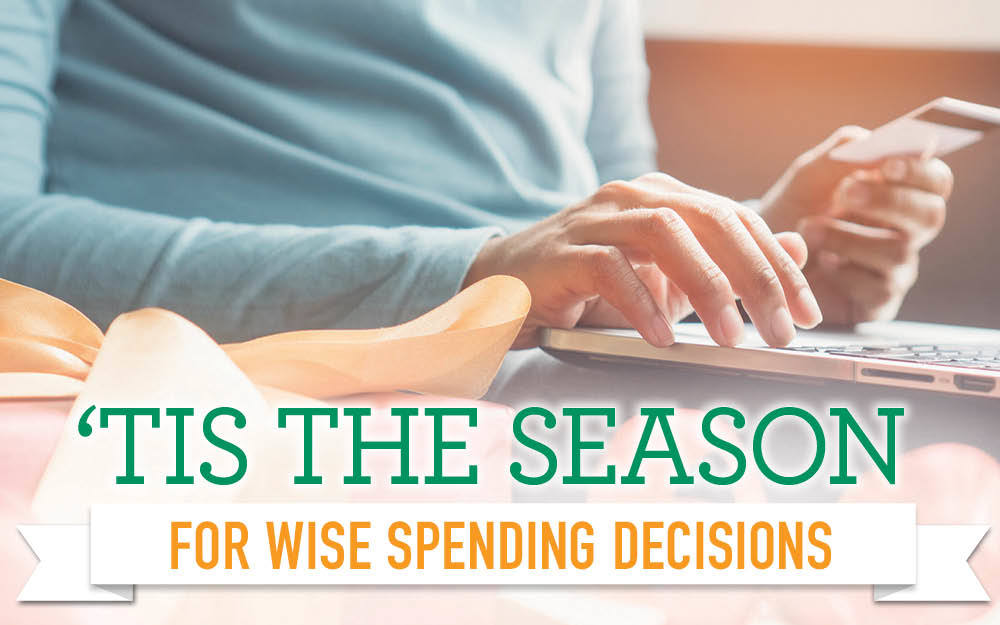 The traditional festive holiday season is likely to be a little different this year, but one thing is likely to remain the same – the temptation to spend and the post-Christmas budget hangover.

Last year Australians spent about $1000 each for Christmas on presents, decorations, travel and charity donations. For 28 per cent of us, this expenditure meant using credit cards or buy now pay later (BNPL).i

While many will use credit again this festive season, the current economic circumstances may make us think twice about our spending. It’s not just what you spend, but how you spend that could make all the difference.

So, if you plan to use credit to help manage your Christmas spending, what are the options?

Even before COVID, more and more people were turning away from the traditional credit card and opting instead for a buy now, pay later payment method. BNPL providers in Australia include companies such as Afterpay and Zip, but there are many more.

The use of BNPL may be due to convenience or an aversion to debt, or a bit of both.

In a recent report, the Australian Securities and Investments Commission (ASIC) found BNPL transactions jumped by 90 per cent to 32 million in the 2018-19 financial year.ii

But for those who still use a credit card, it is estimated that more than 2 million Australians have gone over their limit since March this year as the economic slowdown takes its toll on household finances.iv

Initially BNPL was popular with millennials, but over time more baby boomers and Gen X have opted for this form of credit which boasts that it is interest free. Compare that with interest on credit card balances which are mostly in double digits and can even be as high as 20 per cent.

But don’t be fooled.

There may be no interest rates on buy now pay later, but there are fees and these can quickly add up.

All BNPL providers have slightly different terms and conditions, but fees may include:

Of course, that does not mean you should avoid buy now, pay later offerings. If you meet all your payments on time, then it can be a useful form of credit. The key is to be cautious.

For instance, do not run up debt with multiple providers. Not only can that prove expensive, but it can also be difficult to manage. It can soon become expensive if you have late payment fees to pay to several providers.

ASIC research found one in five BNPL users missed payments in the 2018-19 financial year. This translated into fee revenue of $43 million for providers, a jump of 38 per cent over the year and financial hardship for 21 per cent of users. As a result, ASIC said some people were cutting back on meals and other essentials or taking out additional loans to make BNPL payments on time.

Now the big banks are meeting the challenge of BNPL to traditional credit cards head on, with the launch of interest free credit cards and partnerships with BNPL providers.

While the new interest free credit cards have no interest charges or late fees, they typically have a minimum monthly payment and a monthly fee in months where you don’t make a transaction.

Finding money for everyday items, let alone festive spending, has become a juggle for many this year. The gradual transitioning away from support payments such as Job Keeper and Job Seeker won’t make things any easier.

Whatever your financial circumstances, if you monitor your money carefully and make changes to your expectations, then there is no reason why this festive season can’t be just as good this year as last. One of the lasting benefits of 2020 may well be that it makes us more proactive about managing our money wisely. 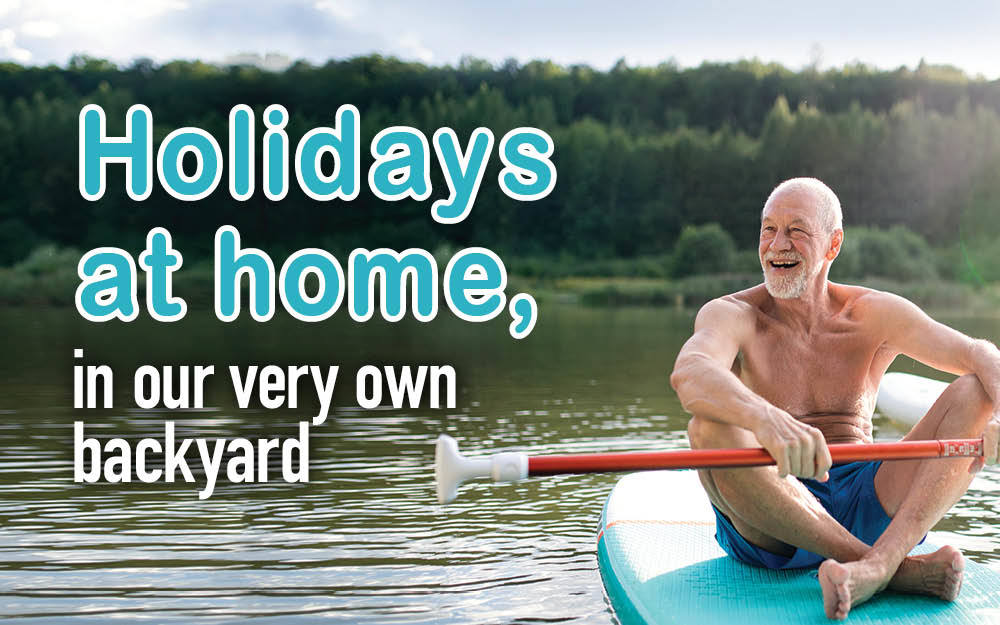 For many Aussies with the travel itch, the COVID-19 pandemic put an end to flying to far-off destinations or even venturing beyond your own city or state. While we may be grounded for some time, fortunately you can still enjoy novel and fun adventures closer to home. You might be surprised to find out what is within reach. And at the very least, start planning trips for the coming months ahead.

If you can’t make it all the way to England to see Stonehenge, Esperence offers a full size replica in Western Australia. Esperance Stonehenge has been designed to look just like the original. The stones have a local touch though, made from Esperance Pink Granite, and the layout cleverly takes into account the Summer and Winter Solstices in the Southern Hemisphere. Once you’ve marvelled at the rock formation, be sure to check out other Esperance sights such as the Pink Lake and array of pristine beaches.

For wine lovers and foodies

So France has Bordeaux and Spain has Priorat, but we have the Barossa Valley. The world-famous wine producing region in South Australia should be on every wine lover and foodie’s travel list. Less than an hour outside of Adelaide, the Barossa is home to over 150 wineries and 80 cellar doors – think Penfolds, Wolf Blass, Jacob’s Creek and plenty more. Clearly you’ll want to pace yourself and there is plenty to explore in the three main towns: Tanunda, Nuriootpa and Angaston. The restaurant scene is thriving in the Barossa so book in advance to ensure you get a seat at the table.

Be like a bird among the trees at Victoria’s Otway Fly Treetop Adventures. The 25m high and 600m long walkway gives incredible views over the Otways rainforest. For those wanting something more daring, the 47m tall Spiral Tower sways in the breeze so you can feel one with nature. Ziplining will find you suspended 30m from the forest floor – while it’s not as daring as Zip 2000 in South Africa’s Sun City, it’s an exhilarating experience not to be missed.

Thousands of hikers from across the world descend on Tasmania’s Overland Track every year. It’s easy to see why this bushwalking track is so popular, with Cradle Mountain-Lake St Clair National Park being part of the incredible Tasmanian Wilderness World Heritage Area. It’s not suitable for the novice walker, being a six day hike which is 65km one way, with rocky and steep sections. But you’ll be rewarded by breathtaking views and alpine flora and fauna. If plans to do the Appalachian Trail in the US or the Tour du Mont Blanc across Europe were shelved, head to Tassie instead.

Australia has some of the best beaches in the world, so instead of Hawaii, head to the Gold Coast. Currumbin Beach is regularly voted Queensland’s cleanest beach and makes for a picture perfect holiday spot – just think of all those amazing Instagram pics you can share! Known as The Alley, the entrance to the ocean is patrolled by lifeguards and is a great place for beginner surfers and swimmers. Whether you’re up for a surf, swim or just want to lay on the sand, Currumbin Beach is the place to be during the summer.

Dreaming of Niagara Falls? Why not head to Fitzroy Falls instead? Located within Morton National Park in the Southern Highlands, it’s only two hours out of Sydney. The waterfall descends 81m into picturesque Kangaroo Valley. As well as the beautiful waterfall, there are a range of hiking trails you can embark such as the East Rim and West Rim walking tracks. There are great picnic spots making for a perfect day trip, as well as a nearby campground if you want to stay put to soak up the ambience.

Travel will look different for some time to come. Holidays at home can provide an opportunity to experience the wonderful, diverse country we call home. As you head home with great memories, stories to share and spectacular photos you’ll also be leaving a lasting impact on the local tourism industry, who need the support on their road to recovery.