It’s September and spring is in the air. It’s time to shake off the winter cobwebs, get out into the garden or the great outdoors. It’s also a good time to plan your summer break.

August was a challenging month for investors. Global markets reacted negatively to an escalation in the US-China trade war and the looming no-deal Brexit. US economic growth slowed to an annual rate of 2 per cent in the June quarter, down from 3.1 per cent the previous quarter. China’s economy is also slowing – industrial production, retail sales and fixed asset investment all recorded lower growth in the year to July.

To stimulate the US economy, the US Federal Reserve cut rates by 25 basis points, the first cut since 2008. US short-term bond yields rose as did the US dollar, but shares fell around the globe. In the US, shares were down around 2 per cent for the month while Australian shares shed 3 per cent. The Hong Kong market fell more than 7 per cent as protests continued and UK shares fell 5 per cent on Brexit worries.

In Australia, most companies reported positive earnings for the 2019 financial year, but only a little over half managed to lift profits. One challenge is retail spending, up 0.2 per cent in the year to June, the weakest in 28 years. The NAB business confidence index rose in July, but the business conditions index fell to 2.4 points (the long-term average is 5.8 points).

On the bright side, Australia’s trade surplus hit a new record high of $49.9 billion in the year to June. The Australian dollar finished the month lower at around US67c, which should support our exporters. 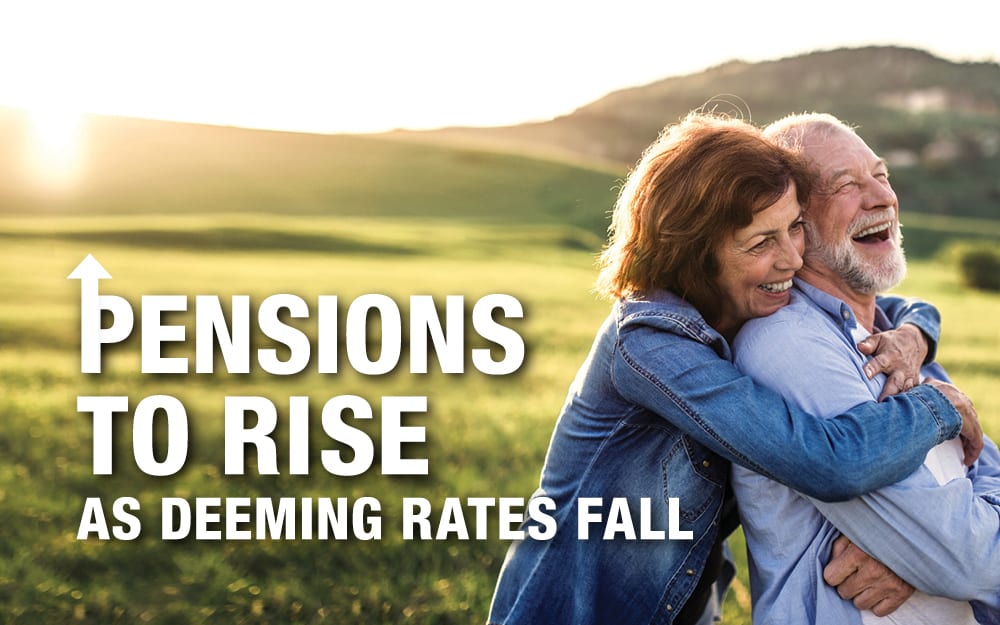 It’s been a long time coming, but up to 630,000 retirees could soon enjoy a small but welcome increase in their Age Pension payments following a cut in deeming rates used for the pension income test.i

Under the Age Pension income test, you are ‘deemed’ to earn a certain rate of interest on your savings and investments no matter how much income you actually receive.

The federal government announced in July that it will cut the lower deeming rate from 1.75 per cent to 1 per cent for financial investments worth up to $51,800 for single pensioners and $86,200 for pensioner couples where at least one person receives a pension. The upper deeming rate for savings above these thresholds will be cut from 3.25 per cent to 3 per cent.ii

As a result, Treasurer Josh Frydenberg said single pensioners could be better off by up to $804 a year and couples by up to just over $1,000.

Eligible pensioners will begin to receive the benefits from 20 September 2019 when pensions are next adjusted, but any extra payments will be backdated to July 1.

How does deeming work?

The deeming rules apply to income from financial assets such as superannuation (where the individual has reached age pension age), shares, savings accounts, term deposits and other fixed interest investments.

Different deeming rates apply if you are single or live with a partner.

For every $1 you earn over the threshold you lose 50c in pension income.

Who is most affected?

Because of the complex interplay between the Age Pension income and assets tests, your relationship status and whether you own your home, the people most affected by deeming rates are part-pensioners.

With official interest rates at a record low of 1 per cent, Age Pensioners who depend on income from cash investments face a double whammy. Not only do they receive less income from their bank deposits as interest rates fall, but they also risk losing some pension because they are deemed to earn more than they do.

Until the recent cut to deeming rates was announced, they had not moved since 2015. Since then, the Reserve Bank has cut the official cash rate five times, most recently in July, to a new historic low of 1 per cent with further cuts expected.

But there are also winners from the current level of deeming rates.

Even better off are retirees with money invested in Australian shares (either owned directly or within managed funds or superannuation) where yields have been over 4 per cent.iii This is significantly higher than the top deeming rate of 3 per cent.

Growth investments such as shares not only provide the opportunity to grow your capital over the long term, they pay regular income in the form of dividends along the way. It’s understandable that retirees are risk averse and want to protect their capital. Bank term deposits provide the certainty of capital protection with a reliable income stream. But there is also an argument for diversifying your sources of income once you have covered your needs for ready cash.

If you would like to discuss your investment strategy in the light of changes to deeming rates and your Age Pension entitlements, give us a call.