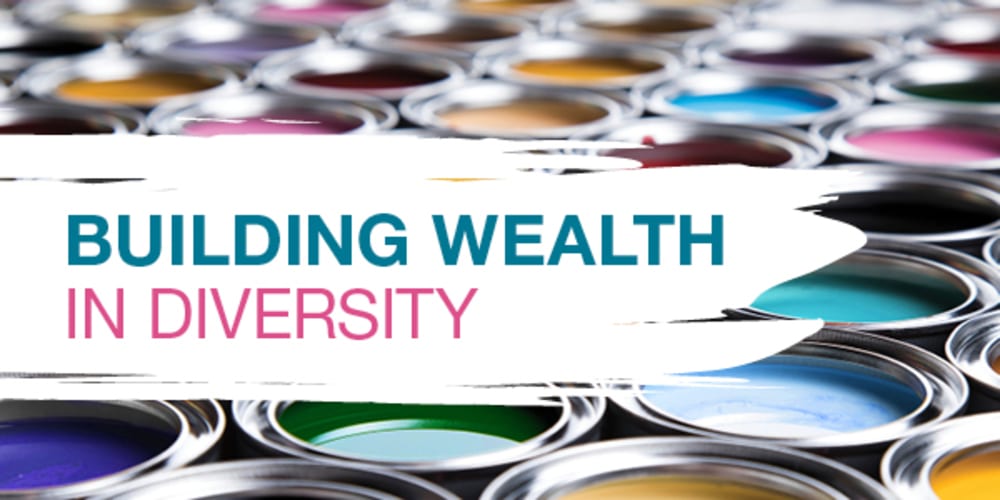 What a difference a year makes. In recent months, Australian shares hit a record high, the Aussie dollar dipped to levels not seen since the GFC and interest rates were cut to historic lows.

Towards the end of 2018, shares were in the doldrums and while experts agreed the Aussie dollar would go lower most tipped the next move in interest rates would be up.

All of which goes to show that when it comes to predicting financial markets, the only sure thing is uncertainty. There’s no avoiding market risk, but it does need to be managed if you want to build enough wealth to live comfortably in retirement and achieve other life goals along the way.

Thankfully, there is a way to reduce the impact of market volatility on your overall investment portfolio. Hint: it’s not by putting all your money in the bank.

The best way to reduce the risk of one bad investment or a downturn in one market decimating your returns is to hold a mix of investments. This is what is referred to as diversification or, as Grandma might say, not putting all your eggs in one basket.

To smooth your returns from year to year and avoid the risks of short-term market volatility, you need a mix of investments from different asset classes.

The difficulty of predicting the market in the short-term was certainly in evidence in the year to June 2019.

At the end of 2018 global sharemarkets were gripped by the fear of an escalating US-China trade war, confusion over the final Brexit deal, rising US interest rates and falling commodity prices. Investors who panicked back then and sold their shares would have missed out on the unexpected rebound in global shares.

A year of surprises 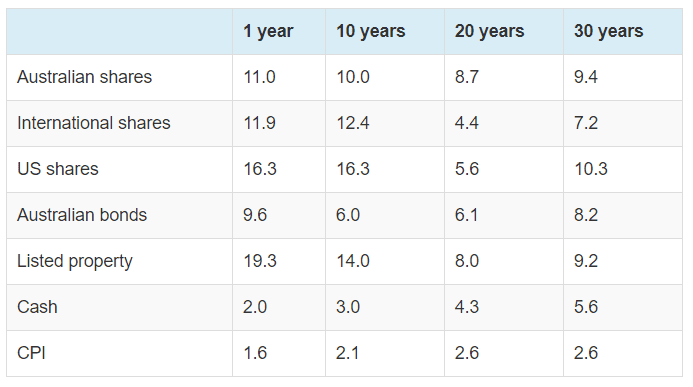 Although not included in the table of returns from listed investments, the worst performing asset class in the year to 30 June was Australian residential property. According to CoreLogic, Australian home values fell 6.9 per cent over the year. But while the housing market downturn was constantly in the news, good news in other sectors of the property market went largely unnoticed.

The best performing asset class by far in the year to June was Australian listed property, up 19.3 per cent. ASX-listed real estate investment trusts (REITs) invest in a wide range of office, industrial and retail property.

The gap in performance between direct residential property and listed property highlight another important aspect of diversification. You also need to diversify within asset classes.

Look beyond your backyard

Where property is concerned, that means investing across a range of property types and geographic locations. By diversifying your property investments, you reduce the risk of short-term price fluctuations in one location which can result in a big loss if you are forced to sell at the bottom of the market.

The same holds true for shares. By investing in a range of companies, industry sectors and countries you reduce the risk of short-term losses.

Many Australians have a share portfolio dominated by the big banks and miners, attracted by their fully franked dividends in a low interest rate world. This is especially so for retirees and others who rely on income from their investments.

The danger is that investors with a portfolio heavily weighted towards local stocks are not only exposed to a downturn in the bank and resources sectors but also the opportunity cost of not being invested in some of the world’s most dynamic companies.

Time is your friend

Over the last 30 years the top performing asset class was US shares with an average annual return of 10.3 per cent. Australian shares (9.4 per cent) and listed property (9.2 per cent) were not far behind.

And then there was cash. In a time of record low interest rates cash in the bank returned 2 per cent in the year to June 30, barely ahead of inflation of 1.6 per cent. The return was better over 30 years (5.6 per cent), but still well behind the pack.

Cash in the bank provides interest but absolutely no capital growth. While it’s important to have enough cash on hand for daily living expenses and emergencies, it won’t build long-term wealth. 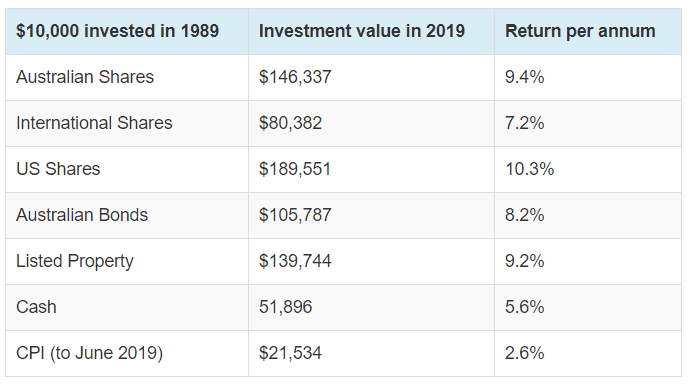 *Growth of $10,000 with no acquisition costs or taxes and all income reinvested.
Source: Andex and Vanguard

There’s no telling what the best performing investments will be in the next 12 months, as past performance is not an indicator of future performance. What we can be confident about is that a portfolio containing a mix of investments across and within asset classes will stand the test of time.

If you would like to discuss your overall investment strategy, please give us a call.