Home » Bonds, inflation and your Investments

Bonds, inflation and your Investments 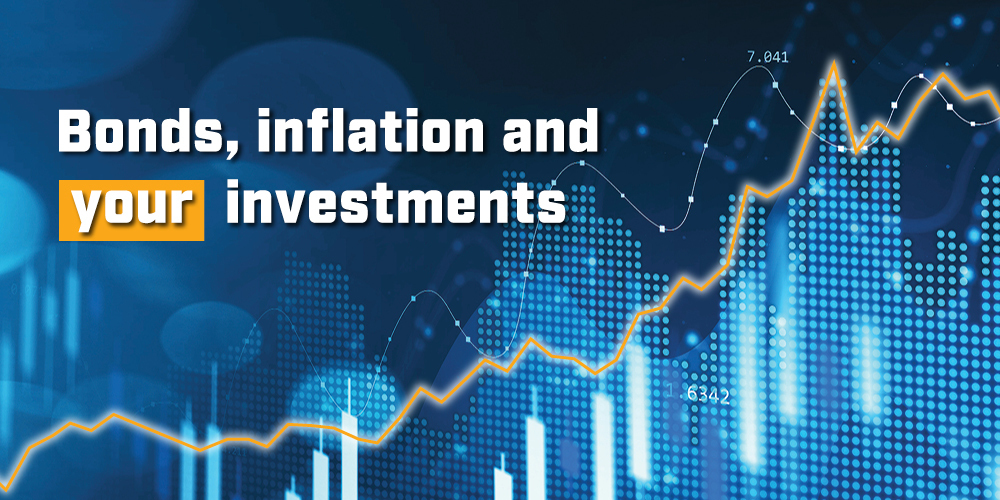 The recent sharp rise in bond rates may not be a big topic of conversation around the Sunday barbecue, but it has set pulses racing on financial markets amid talk of inflation and what that might mean for investors.

US 10-year government bond yields touched 1.61 per cent in early March after starting the year at 0.9 per cent.i Australian 10-year bonds followed suit, jumping from 0.97 per cent at the start of the year to a recent high of 1.81 per cent. ii

That may not seem like much, but to bond watchers it’s significant. Rates have since settled a little lower, but the market is still jittery.

Why are bond yields rising?

Bond yields have been rising due to concerns that global economic growth, and inflation, may bounce back faster and higher than previously expected.

While a return to more ‘normal’ business activity after the pandemic is a good thing, there are fears that massive government stimulus and central bank bond buying programs may reinflate national economies too quickly.

As vaccine rollouts gather pace, the OECD recently lifted its 2021 economic growth forecast for the global economy to 5.6 per cent, up from 4.2 per cent in December. Most of this is due to a doubling of its US growth forecast to 6.5 per cent, on the back of the Biden administration’s US$1.9 trillion stimulus package.iii 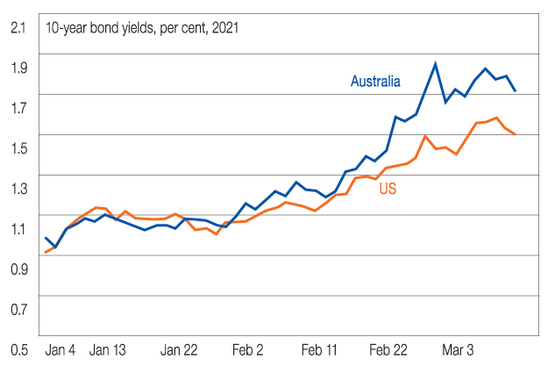 The OECD now expects Australia to grow by 4.5 per cent this year, up from its previous estimate of 3.2 per cent.iv

The risk of inflation

To quash inflation fears, Reserve Bank of Australia (RBA) Governor Philip Lowe recently repeated his intention to keep interest rates low until 2024. The RBA cut official rates to a record low of 0.1 per cent last year and also launched a $200 billion program to buy government bonds with the aim of keeping yields on these bonds at record lows.v

Governor Lowe said inflation- currently 0.9 per cent – would not be anywhere near the RBA’s target of between 2 and 3 per cent until annual wages growth, currently at 1.4 per cent, rises above 3 per cent. This would require unemployment falling closer to 4 per cent from the current 6.4 per cent.

In other words, there’s some arm wrestling going on between central banks and the market over whose view of inflation and interest rates will prevail, with no clear winner.

What does this mean for investors?

Bond yields move in an inverse relation to prices, so yields rise as prices fall. Bond prices have been falling because investors are concerned that rising inflation will erode the value of the yields on their existing bond holdings, so they sell.

For income investors, falling bond prices could mean capital losses as the value of their existing bond holdings is eroded by rising rates, but healthier income in future.

The prospect of higher interest rates also has implications for other investments, normally tipping the balance away from growth assets such as shares and property to bonds and other fixed interest investments.

Shares shaken but not stirred

In recent years, low interest rates have sent investors flocking to shares for their dividend yields and capital growth. In 2020, US shares led the charge with the tech-heavy Nasdaq index up 43.6%. This was on the back of high growth stocks such as Facebook, Amazon, Apple, Netflix and Google – the so-called FAANGs – which soared during the pandemic.vi

It’s these high growth stocks that are most sensitive to rate change. As the debate over inflation raged, FAANG stocks fell nearly 17 per cent from mid to late February and remain volatile.

That doesn’t mean all shares are vulnerable. Instead, market analysts expect a shift to ‘value’ stocks. These include traditional industrial companies and banks which were sold off during the pandemic but stand to gain from economic recovery.

Against expectations, the Australian residential property market has also performed strongly despite the pandemic, fuelled by low interest rates.

National housing values rose 4 per cent in the year to February, while total returns including rental yields rose 7.6 per cent. But averages hide a patchy performance, with Darwin leading the pack (up 13.8 per cent) and Melbourne dragging up the rear (down 1.3 per cent).vii

There are concerns that ultra-low interest rates risk fuelling a house price bubble and worsening housing affordability. In answer to these fears, Governor Lowe said he was prepared to tighten lending standards quickly if the market gets out of hand. Only time will tell who wins the tussle between those who think inflation is a threat and those who think it’s under control. As always, patient investors with a well-diversified portfolio are best placed to weather any short-term market fluctuations.

If you would like to discuss your overall investment strategy, give us a call.